Despite the fact that artificial intelligence is increasingly integrated into our lives in the digital era, key competencies that distinguish people from robots are creativity and ability to make responsible decisions. And owing to this a Man is still important in business of the future. Where do corporations move forward for several decades? What will happen to employees, managers, teams? 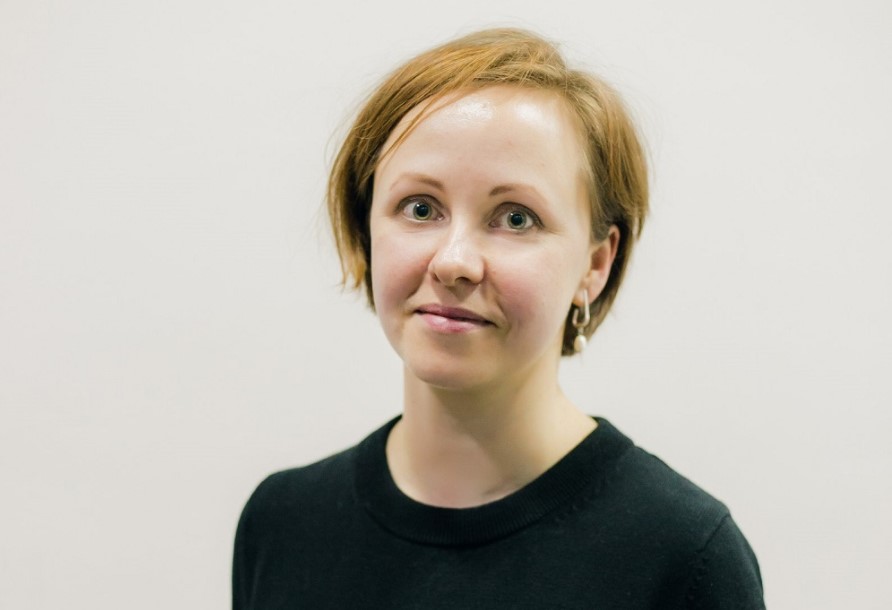 This was touched upon during an open lecture by Oleksandra Alkhimovych, a teacher of UCU Center for Leadership and Lviv Business School of UCU (LvBS). Known expert in leadership and strategy, she occupied key positions at Luxoft Ukraine, Exigen Services, Rainford Milk Factory in business development, operational management, and building systems for efficient cooperation between departments.

Consequently, analysts try to predict the direction the business will move in: collectivism, or individualism? Into association (integration) or distribution (segmentation)? Based on this polarity, scientists have identified four conditional “worlds”, four major vectors of companies’ strategic development: red (technological), blue (world of corporations), green (with priority on natural resources preservation) and yellow (with a man as the key factor for success). 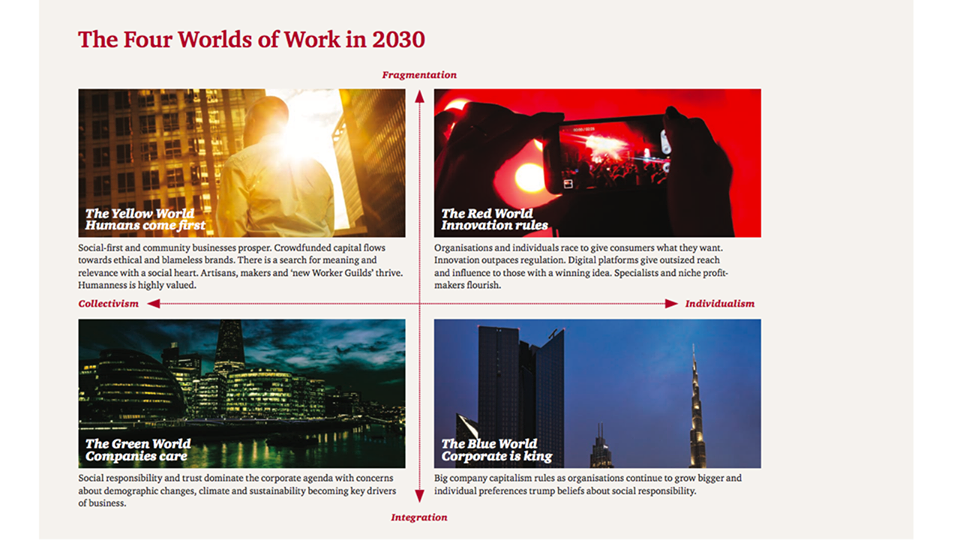 Red world is technological. A vivid example is, of course, IT companies as well as large platforms such as Amazon operating at the junction of technologies and the main business purpose – gaining profit. They create innovative solutions and raise huge revenues. As for the human resource, such companies may employ both 1,000 people and 10. And not the specialist role but his/ her competency is in the foreground. Such teams have certain ideological leaders but the classical role of the leader is erased in technology companies. This means that it is strategically worthwhile for such companies to focus on development of teams and not the leaders.

Blue is the world of corporations. The main development directions are monopolization and consolidation of associations. Merger agreements are inherent, which allow them to enter new markets and increase sales volumes. The weak points of the companies are certain bureaucracy in the processes and impossibility to be flexible, and their advantage, on the other hand, is stability and ability to scale. Budgets of such companies can by ten folds exceed budgets of certain countries. Such concepts as business environment and corporate culture will preserve their importance. And when it comes to employees’ role, the emphasis will be laid on easily measurable high performance. For instance, bracelets measuring the employee speed when moving across the office are already popular in Japan: if this speed is slower than the declared one, the built-in sensor will signal of the need to accelerate the work pace.

Green is the world taking care of natural resources. There are already companies, which can make a business model from natural resources protection and monetize it with success. The most famous example is Tesla, and the number of such companies will increase in the nearest future. About the role of employee: employees will be recruited by such companies based on values, company’s philosophy should be close and relevant to them. Business in green world will report on the use of natural resources as to each employee, everything will be clearly calculated and controlled by appropriate sanctions. Social reports assessing social significance of the company with regard to environment will also be introduced.
Yellow is the world where a Man remains the key factor for success. Where everything made thereby will be appreciated more than anything. This business is about family values, social entrepreneurship and the fact that robots and technologies shall serve a man and not vice versa.

We can dwell upon the questions, which of these worlds we are now in, what vector for the future we have chosen, what companies we work today in. However, one should understand: actually none of these business worlds will exist in its pure form. Companies will move from one world to another, feature components of each of them.

And each manager, professional and leader, in the context of the company’s development strategy, should understand that no scenarios can be predicted with 100%. In general, future is not a final point, it is a certain set of scenarios, with high likelihood thereof. We shape a strategy and action plan and time will tell how close we approach them.

Reference. UCU Center for Leadership was established due to support of Ivey’s Ihnatowycz Institute for Leadership and aims at making a breakthrough in development of methodology and tools to deliver leadership courses: using case studies, self-reflection, teamwork, comprehensive evaluation and post-program coaching. This will allow the program participants to go from deeper self-awareness of their strengths and weaknesses to understanding what skills they need to enhance productivity, manage changes and develop leadership culture in their organization.